The Rhetoric of "Race Relations" 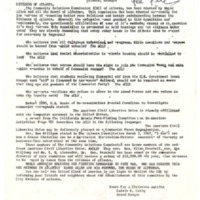 These exhibits relate to "race relations" in Atlanta during the tenure of Mayor Ivan Allen (1962-1970). Each exhibit acts as kind of case study in various issues in the urban history of Atlanta. The documents in these exhibits address issues such as civil rights, discrimination and racism, housing policy, police brutality, the civic representation of communities of color, and momentus events of the Civil Rights era in Atlanta such as the Summerhill riots and the funeral of Dr. Martin Luther King Jr. Notable documents include a letter from a Grand Dragon of the Ku Klux Klan calling for the abolishment of the Community Relations Commission (CRC) and correspondence sent to the Mayor's office following the arrest of Stokely Carmichael, chairman of the Student Nonviolent Coordinating Commmittee (SNCC), during the Summerhill riots of September 1966.

The exhibit "The Community Relations Commission" is a set of documents from 1966-67 related to the CRC's role as an increasingly important civic agency in understanding and communicating the concerns and crises of Atlanta's communities of color to the Mayor's office.

The exhibit "Adminstrative Response to Assassination of Dr. Martin Luther King Jr." contains a 34-page folder of documents related mostly to the aftermath of King's murder in Memphis, Tennessee and plans for his funeral in Atlanta. This folder has been presented as a single exhibit to showcase the range of ephemeral and momentus documents and communications that accumulate "behind the scenes" of a major American historical event such as King's death and funeral. 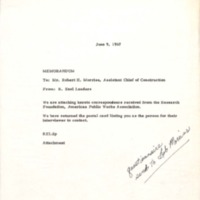 These exhibits relate to environmental issues and the urban environment in the City of Atlanta during the tenure of Mayor Ivan Allen (1962-1970). While many of the documents within the exhibits tell individual stories or act as evidence of isolated events or concerns, read together they show the ways that issues of environmental justice, race, and poverty overlapped in Atlanta in the late 1960s.

"The Pollution of Proctor Creek" exhibit follows a series of documents from throughout 1967 that create a narrative about the the city's response to the degradation of Proctor Creek on Atlanta's Westside, one of the largest urban watersheds in the Atlanta Metropolitan area. Issues at stake include pollution, flooding, health effects to surrounding communities, water and sewage infrastructure problems, and the availability of state and federal funding.

The exhibit "Parks and Rec: Atlanta's Outdoor Urban Environment" showcases a range of documents related to parks and recreation operations in the city in the years 1967 and 1969, including park maintenaince, complaints about parks--particularly Piedmont Park, construction of "playlots" and other outdoor infrastructure, city beautification efforts, and the need for recreational facilities in Atlanta's communities of color. One sustained narrative within this exhibit (four letters from July-October 1967) follows a conversation about the construction of a footbridge over Proctor Creek to allow access to the newly constructed Gun Club Park for the Perry Homes Housing Project.

The Summerhill Riot or the Atlanta Rebellion?: Uprising and Inequity in the "City Too Busy To Hate" 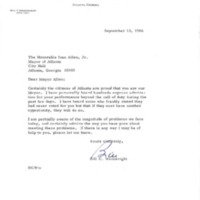 The Summerhill Riot is more heavily represented in the Ivan Allen Digital Archive than any other single event from the tenure of Mayor Allen. The number and range of documents in the archive reflect both the importance and the complexity of these events to Mayor Allen's legacy and the history of race relations in Atlanta. To date, there is no comphrensive resource on the events that became known as the Summerhill Riot. The Ivan Allen Digital Archive is the main repository of primary source material related to this historic event, making it a key resource in the development of the narratives about the Summerhill Riot.

The Summerhill Riot, also known as the Atlanta Rebellion, is a series of events that began on September 6, 1966 in the majority black neighborhood of Summerhill following the police shooting of an unarmed black man, Harold Prather. A group of Summerhill residents, which grew to over a thousand people, gathered together in response to the shooting to protest longterm local problems related to ongoing inequities, including discriminatory policing, poor housing, inadequate public services, the urban renewal policies that had afffected the neighborhood, and the recent construction of the Atlanta-Fulton County Stadium on the edge of Summerhill. The Student Nonviolent Coordinating Committee (SNCC), which had been active in Atlanta since its founding in 1960, became involved when members of the organization joined the protests. A heavy police presence was met with resistance by protestors, which resulted in the image of the events as a "riot." As the sitatuion escalated, Mayor Allen visited the neighborhood of Summerhill to address protestors directly. A series of memorable photographs of Mayor Allen at the "riot" are available in the Ivan Allen, Jr. Digital Collection. Allen placed blame for the events directly on SNCC. Members of SNCC, including Carmichael, would be arrested soon after. The Summerhill uprising was reported in the national media and Mayor Allen would receive widespread praise for his response. A chapter in Allen's memoir, Mayor: Notes on the Sixties, titled "Riot" provides his account of the events in Summerhill.

The two exhibits, "Responses to Summerhill" and "SNCC, Black Power, and the Atlanta Rebellion," collect the sixteen folders about the Summerhill Riot from the Ivan Allen Digital Archive.

The Legend of the Black Mecca: Politics and Class in the Making of Modern Atlanta by Maurice J. Hobson (2017)

Mayor Allen and the Making of the Atlanta Braves 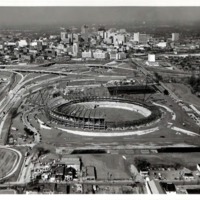 These exhibits relate to the campaign to bring a major league baseball team to the city of Atlanta, an effort driven by Mayor Allen's ambitious plans for construction of a stadium directly southeast of downtown. With a completed new stadium, Allen oversaw the move of the National League Milwaukee Braves to Atlanta. In April 1966, the Atlanta Braves played their first home opener at Atlanta-Fulton County Stadium.

The "Building the Stadium" exhibit collects 17 documents and photographs in chronological order, from October 1964 to April 1966, that offer a series of stories about the stadium's construction, including local and national newspaper clippings, photographs of the stadium's construction, and an opening day scorebook. Narratives within the exhibit include references to the stadium's impact on the neighborhood where it was built, baseball player Hank Aaron's attitude toward living and playing in Atlanta, and Mayor Allen's use of the stadium and the Braves to promote a renewed national image of Atlanta.

The exhibit "Persuading the Milwaukee Braves to Become the Atlanta Braves" features 13 documents and 2 complete folders, the majority of which cover the months of October and November 1964 when discussions to acquire the Braves went public, including corresondence to Braves ownership and Mayor Allen, complaints from Milwaukee Braves fans, and baseball player Hank Aaron's stance on playing in Atlanta. 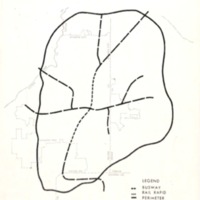 The current shape of Metropolitan Atlanta Rapid Transit Authority (MARTA) dates back to the 1960s after the Metropolitan Atlanta Transit Study Commission released its recommendations for an extensive transit system in Atlanta and the surrounding suburbs. These documents show some of the responses to the proposed rail and bus systems and give us a picture of MARTA's early development, community responses and concerns, as well as providing a window into transit issues for a major metropolitan area. Many of these same concerns are echoed today. 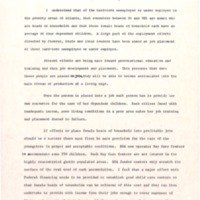 As more and more women entered the work force, community leaders recognized the need for support and job training. This exhibit provides insight into various initiatives including the job corp for girls and the need for single women to find safe housing.

The Ku Klux Klan in Atlanta 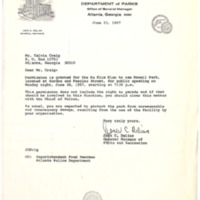 Like many other cities in the US, especially in the South, the Ku Klux Klan had an active political presence. These letters give a brief picture into clan activities in Atlanta, including picketing and renting a park for an event. 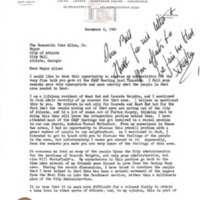 Like many cities in the US before the civil rights era and desegration, Atlanta housing was segregated. During Mayor Allen's tenure, the city grappled with the same issues many other cities faced: white flight and backlash against neighborhood integration. This exhibit contains some community letters to Mayor Allen and includes a Task Force recommendation on Integration and a White Paper that guided his administration.

Like many, Mayor Allen mourned the assassination of Martin Luther King Jr. and feared for its implications. Documents in Mayor Allen's collection provide insight into Atlanta's preparation for MLK's funeral and concerns that it would exacerbate racial tensions.